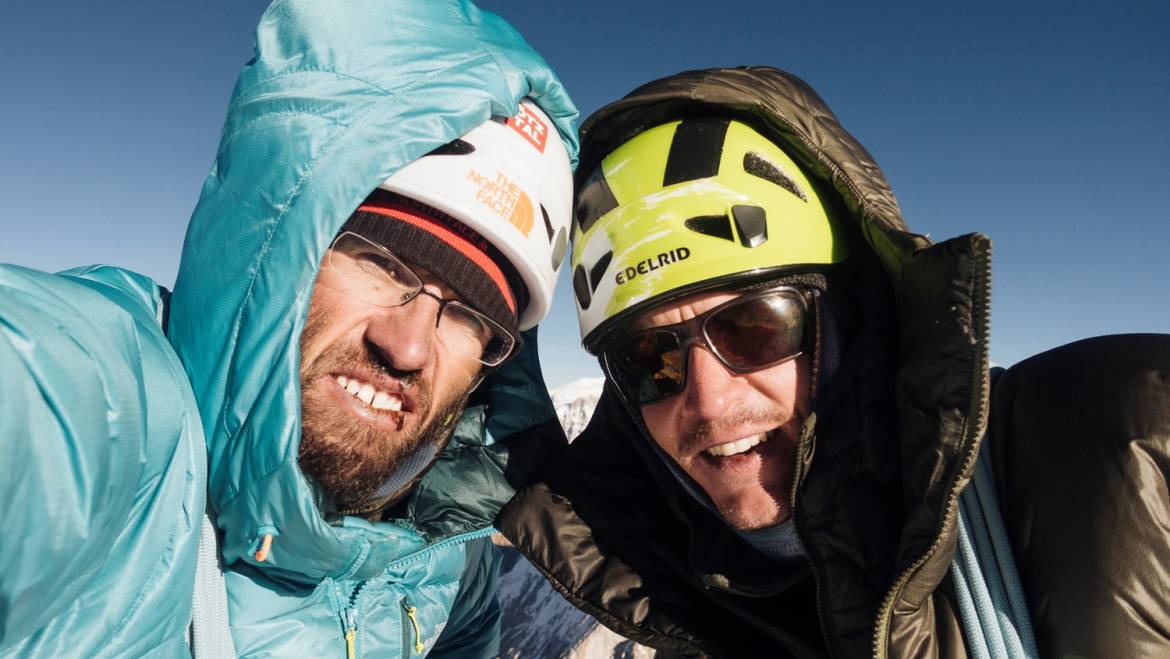 Stabio, Switzerland, 12 December 2016 – On 10th November, The North Face athlete, Hansjörg Auer and Alex Blümel summited Gimmigela East (7005m) from the Nepal, Northside of the mountain – the first team ever to do so. It is also only the third known ascent of the summit after trips in 1993 and 1994.

Located on the border between Nepal and India Gimmigela East (7005m), it is the subpeak of Gimmigela Chuli (7350m), and also referred to as ‚Gimmigela’s Sister‘. It´s steep Northface had never been tried before by any expedition and was a well hidden but epic project in the remote Kangchenjunga area.

After five days of long trekking through the jungle along the Tamar River and subsequently following the higher plateaus of the Ghunsa Valley, Hansjörg and Alex placed their Basecamp a little bit further up, than the classic Pangpema Basecamp, one of Nepal’s most treasured sites.

The pair started the acclimatising trips on Dhromo Southridge and after three nights at 5900m, they started on 8th November  up the Northface of Gimmigela East. Due to a wet Monsun with high precipitation they found the 1200m high face in perfect conditions. After two bivies, of which the second one on the final summit ridge challenged them a lot due to the small spot being totally exposed to strong winds, they reached the summit on 10th November, at 7.30am. A cold, windy but clear morning allowed the duo to see far into the great mountain range of Sikkim and to the unexplored Eastface of Kangchenjunga.

“It was one of those expeditions where it all came together perfectly. A great project, an even greater friendship, a fast and light alpinestyle first ascent, and a ’King Line’ on a 7000m peak in one of the most remote places of the Himalayas,” said Hansjörg.

“Thanks to Alex Blümel for the great time on and off the wall, and to Elias (photographer) and Matteo (filmer) for making the time in Basecamp during this expedition even sweeter.”